I initially saw The Messenger at Pax East 2018. Intrigued by the script font, the blue background and of course, the incredibly fun looking platforming, I added it to my Steam Wishlist on a whim and continued on with my pop culture adventure. A few months later, I get a notification that one of the games on my wishlist released, and on yet another whim, bought it. I knew essentially nothing about the game aside from the platforming aspect. I didn’t know I was in for an adventure that would take a hold of my life ransom for a full week with practically no pause. END_OF_DOCUMENT_TOKEN_TO_BE_REPLACED

Two days ago, Nintendo announced the details about Nintendo Online, their online service for the Nintendo Switch. After having gone over the details of it, I’d have to say that not only is Nintendo Online lackluster, it’s a slap in the face of every consumer that bought the switch that wants to use their online functionality.  END_OF_DOCUMENT_TOKEN_TO_BE_REPLACED

The Metroidvania genre is a very unique, but growing genre. It’s name is a  combination of the popular Nintendo franchise Metroid and Konami’s Castlevania series, specifically Castlevania: Symphony of the Night. It is strongly dependent on a few concepts that we’ll list below before we dive into what my favorites are.  END_OF_DOCUMENT_TOKEN_TO_BE_REPLACED

Psyonix’s Rocket League has broken a lot of boundaries in the gaming world. They’ve broken into the E-Sports world with their infectiously competitive game of ‘soccer cars’, and they’ve achieved cross-network play between their various platforms. The premise of Rocket League is simple, you drive a car that is rocket powered and hit the ball into the goal. The game is a cross between soccer and demolition derby, allowing you to fly through the air with boosts in order to score points in the five minute match. But how does this game do on the Nintendo Switch? END_OF_DOCUMENT_TOKEN_TO_BE_REPLACED

Satoru Iwata passed away yesterday, July 11, 2015. Nintendo has released a statement that he passed away due to a tumor in his bile duct at the age of 55.

I never got to meet Iwata-san. Truth be told, I knew about him as the President and CEO of Nintendo, my favorite gaming company. He worked on games that became part of the childhood of millions like Earthbound, Kirby, Balloon Fight, and would later work on Pokemon, Legend of Zelda, and Animal Crossing. Take a moment to look at the titles I listed. I guarantee you can recall at least one character from those franchises combined, whether it be Link, Pikachu, the Villager, Meta Knight or Ness.
Iwata is one of the main reasons that Super Smash Brothers Melee finished on time, and he was the reason Pokemon Gold/Silver/Crystal had a second region to go to, the Kanto Region from the original Red/Blue/Yellow. Linger on that thought, it was the only major Pokemon game to date to feature two regions and 16 badges.
I find myself at a loss when I think about all the things that Iwata has done for Nintendo, for all the fans he indirectly had by making the games that would be apart of the childhood of millions. I was born in 1994, so I was lucky enough to play Pokemon Yellow when it came out. I remember buying it from Costco and getting a Purple Gameboy Color to boot. I still have them sitting next to me. I play it from time to time, just because it was such a classic. I also play Crystal, because it is the only 2nd Generation Pokemon game I have, besides Heart Gold for the DS, that I can play. I remember being completely blown away that I could get 16 badges. That was so cool to me. And it was his idea.
Super Smash Brothers Melee was the first true party game that I played, and I was introduced to it because of my cousin. After that, I was hooked on Nintendo. I was able to see all of these cool characters, and instantly bought the games they were from. I was enthralled by Legend of Zelda, laughed and enjoyed Kirby’s Nightmare in Dreamland, fascinated by Star Fox and obviously obsessed with Pokemon.
To think one man had such an impact on an entire company, industry, and audience completely blows my mind. I wish I got to meet you Iwata-san. Thanks for everything, I never met you, but you made my childhood amazing.
Earlier today, Nintendo dropped news about their latest hand held console, the Nintendo 2DS. This is Nintendo’s cheaper 3DS alternative, and I personally say it’s a great idea. The 2DS is chunkier than the 3DS and the 3DS XL The 2DS doesn’t fold like its predecessors do so it gives it an old school retro feel to it. The red and white color scheme also gives a retro feel as well. The main part about the 2DS is that it doesn’t have the switch that can turn on the 3D function of the console. This might be viewed as a setback for some, but I have asked many 3DS users and they say they barely use the 3D function after the first couple of weeks. The 2DS can also play 3DS games, and is backwards compatible with DS games. This is great for me as well as millions of others since that means I can still play the old DS games like Pokemon Platinum, Eragon, the downside is that they didn’t bring back the GBA slot, so I guess I’ll have to use my old DS for that function, or an SP.
The 2DS looks large in images, but in the Youtube video below, it looks pretty small-ish when the boy is holding it so I guess it’s about the size of the 3DS, just without the folding screen. The target of this product though is for little kids who’s parents don’t want them to strain their eye sight with the 3D function of the 3DS and 3DS XL. I personally thought this was a great idea for Nintendo to release this because it’s basically a budget 3DS. When E3 happened, and Nintendo released news about all of the fantastic 3DS games that were going to release, the 3DS’s price increased slowly but surely. This is basically Nintendo’s way of saying, “Here, we also want the people who may not have as much money for a 3DS to still enjoy our games.” I think it’s old school look, and cheaper price tag will garner it many purchases, and although it may not stack up to 3DS in every aspect, it is still a great way for people who are strapped for cash to still enjoy what Nintendo has to offer. Nintendo has also stated that the 2DS is going to release on October 12, 2013, the same day as Pokemon X and Y. 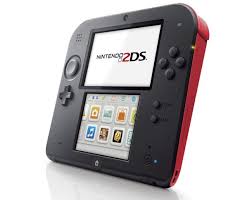 Here is the video for the Nintendo 2DS: http://www.youtube.com/watch?feature=player_embedded&v=sAExBTWIp3M