The iPhone is a great phone: it’s easy to use and gets me through the day without any hassle. I used to blindly think that Apple was the only way to go when it came to portable electronics, since everything was so neatly organized into one package, so how could they possibly go wrong with a new piece of wearable technology?

Back in 2013, the Apple Watch was just a rumor, and as far as the general public was concerned it was called the ‘iWatch’. Lately Google has proven themselves pretty worthy with their latest Android software update, Lollipop, otherwise known as ‘Android L’, which bares its teeth with fantastic new features and a materialistic new user interface. With Google’s release of the beautiful new Moto 360 and recent steel version, I became extremely jealous of Android users, including my friend that just recently placed an order for one. But last year, there was no Moto 360, and there was no Apple Watch, and I was getting pretty sick of not having a magical watch sitting on my wrist. So I did what any logical nerdy guy would do: buy what was available to me, the Pebble Smartwatch.

Now I’ve spoken about the Pebble Smartwatch before and even did a nice little review on it, but now that the Apple Watch has been announced and there is plenty of competition among smartwatches, I can definitely say with confidence that you shouldn’t buy Apple’s new watch. To be honest, I would never have expected myself to deny one of Apple’s products, but the Pebble has definitely set standards as to what a smartwatch should ultimately be. After having worn the Pebble for almost a year now, I’ve gathered some thoughts about what really make the Pebble so great.
It sounds cliche, but seriously, having 4-7 days of battery life on my watch has got to be the greatest thing ever. Whenever I charge my watch I’m always asking myself when it was last charged, and I always forget the day. Sure it’s easy enough to simply just throw the charger on and forget about it as we do with our phones, but I won’t ever forget to put my watch on and it expands my watch into the ability to do sleep tracking, which can technically be done on the Moto 360 but would be a struggle as it would have to be plugged in while you sleep. While you may be fantasizing about what can be done with your fancy new Moto 360 or Apple Watch, whether it’s tracking your heart rate or giving it spoken commands, how often are you really going to utilize that sort of stuff? I will admit that in the times that I do forget to charge my watch, the worst that happens is I flick my wrist to view a text and there’s nothing there, but other than that there’s nothing I’m missing. 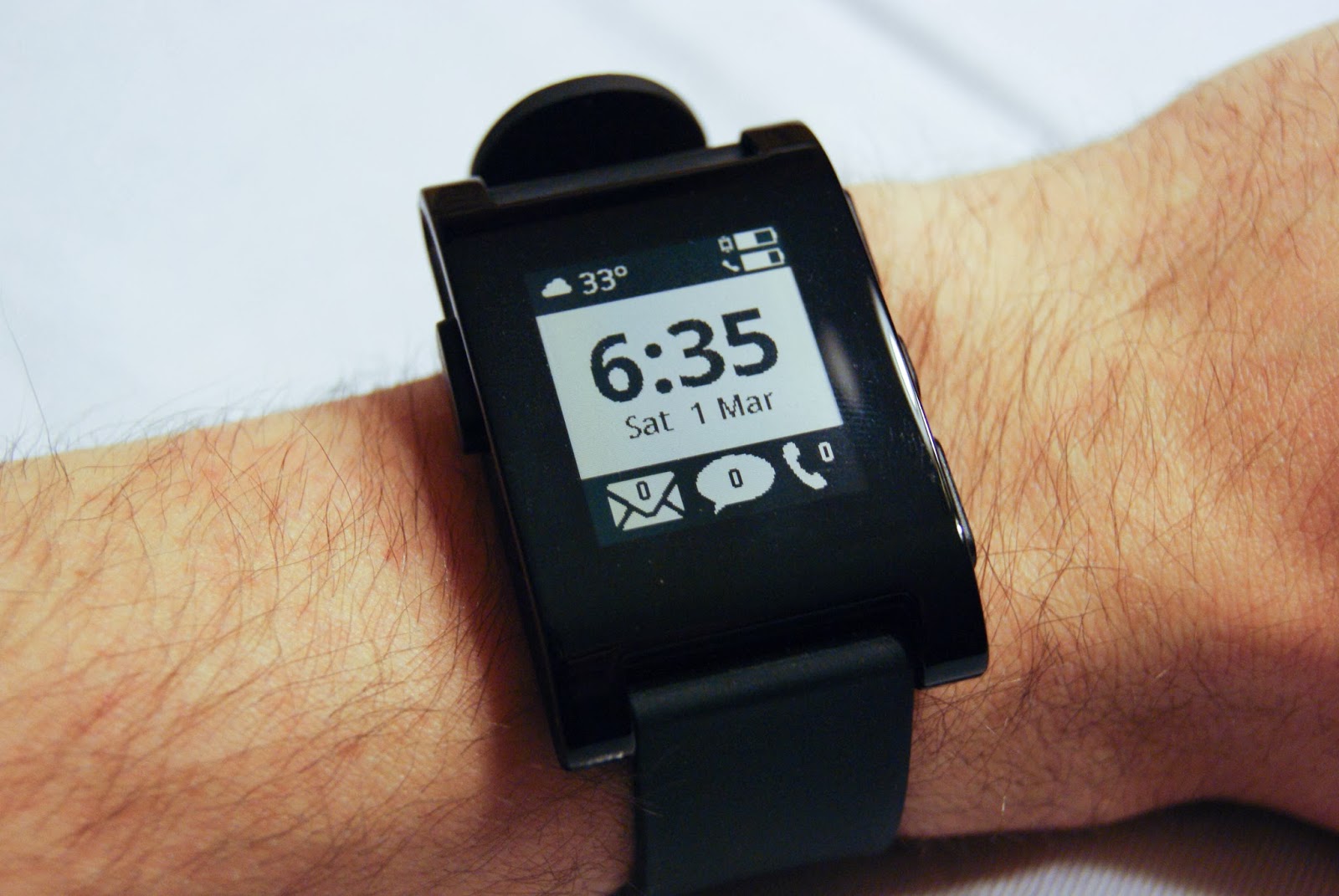 Text, e-mail, and other various push notifications should be the main concern when it comes to a smartwatch. I’ve never told myself I needed anything else, other than maybe some turn-by-turn navigation for when I’m walking through the streets of NYC, which I think is already possible with PebbGPS on iOS. Occasionally I will check in on Foursquare or check the weather on Smartwatch+ in the morning, but really I don’t use many of the apps because there’s simply no need to. Of course developers will come up with some ingenious app ideas and watch faces, for example the Goldeneye 007 or Fallout 3 watchface on the Moto 360, but they’re not really needed, but of course they’re things you can grow attached to. Overall, the trade off is do you want 5-day battery life or do you want an AMOLED touch screen with more app support? I truly feel that the hype of a smartwatch app will die off within a week, and you’ll just be left using it to check time and notifications in the end.

Why haven’t I talked about the Apple Watch yet? Well, because it’s not out yet, and the Moto 360 is the easiest to compare for the basis of what to expect from it. Let’s just throw this out there and really let it simmer in your mind, because this is one of my main points: the Moto 360 is $249, not bad right? The Apple Watch starting price is $389. You can argue that the iPhone is $600+ off contract, that many high-end watches are expensive and that Apple products in general are just very expensive, but this is the FIRST generation Apple Watch. What’s going to happen the year after you just burned $389, spend $389 again on the next generation? Some people definitely don’t have a problem with that, but when you put it into perspective, it is 1.5x more expensive than the Moto 360 and nearly 2x more expensive than the Pebble Steel.

Maybe it’s unfair to compare it to the Pebble since it doesn’t sport a fancy screen, heartbeat sensor or conductive charger, but the Pebble, Apple Watch and Moto 360 all do basic notifications when it comes down to it. It may seem like the Pebble is “behind” on its place in time, but the truth is that it’s right up to speed with current technologies. It is Apple and Google that are trying to push too far ahead by attempting to release watches with one-day battery life, which will likely never improve since battery technology only progresses as much as the technology within the watch does. So long as smartwatch manufacturers keep thinking that putting the latest technology into their watches is a good idea, battery may extend to two days at best.

By the tone of what I’ve already said, you already know that I’m loving my Pebble, and I do think you should buy one before you think about going out and buying a Moto 360 or Apple Watch. If rumors are any indication of what’s to come with new versions of the Pebble, the modular aspects of the new Pebble will likely be customizable watch bands, body colors, and body shapes (e.g. squared and circular). The Moto and Apple Watch are both beautifully designed watches and definitely blow away the Pebble in terms of functionality outside of notifications, but I just don’t think they are needed, although they are very cool pieces of technology that will change the way we interact with our phones. Once the next-generation of smartwatch arrives, I’m sure my opinion will change, but as for now I’m going to stick with my Pebble.