Skip to content
Background:
I have always been a big Sonic the Hedgehog fan, and when I found out there was a Sonic Racing game, I wanted it. I waited for a while for the price to drop, and finally picked it up on Amazon from their “Late Summer Deals” sales for six dollars. I’ve been playing the game for about 15 or so hours, so I think I have a decently good feel for the game, and I thought I’d share my thoughts about it.
Gameplay:
First off, you’ll notice that this game doesn’t include JUST characters from the Sonic series. Heavy from Team Fortress, Ralph from Wreck it Ralph, characters from Sega’s old game Jet Set Radio, and Aiai from Super Monkey Ball all appear as characters that can be played. There are a total of 28 racers, so you’ll hopefully never feel that you are racing the same nine racers over and over again. The controls feel very comfortable, but the game doesn’t have an option to view the controls. Each character has their own kart that has their own stats. I prefer this in comparison to being able to pick various vehicles because then the characters have no real value; they’re just for show. The karts stats are divided into a couple of categories; Speed, Acceleration, Handling, Drift, and All Star. All Star is basically a unique ability that each character has. It adds a little bit of flavor to the game, but they are pretty unpredictable in the sense that you can get them at any point in a race.
Plot: 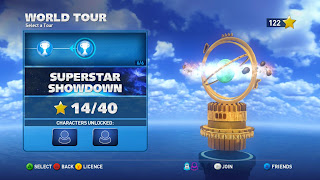 The game has a pretty basic career mode, but it gives the player the ability to see the various types of races the game has to offer such as the basic race, the traffic attack, versus, boost race, and battles. The first mode is world tour mode, and in here, you complete the various types of races in order to obtain stars; a form of progression for the game. The stars main purpose is to unlock characters, and progress through the world tour. To unlock them, you race selecting one off three difficulties. Each difficulty will be increasingly harder, but more stars will be offered if a harder difficulty is selected. The variety of races make the game last longer, and they make you really think about what type of vehicle you should use for each type of competition. You would want to use a kart with really good handling for drift races, but good handling won’t serve you too much in the sprint races, where you need all out speed and boost. The overall World Tour would take a while to complete, but it does keep you busy for a while.
Features:
Minus the World Tour, there is the grand prix mode, where four levels are mixed together, and your main goal is to get first place. There are various cups within the Grand Prix, and more can be unlocked as you unlock more levels and stages within the World Tour. Like most racing games, there is a Time Trials mode where you race a Staff Ghost. A Staff Ghost is essentially the CPU, and your goal is to beat him or her using only one boost, and whatever shortcuts you can fine. I find these time trials to be entertaining, but they can get frustrating at times. The final mode within Career would be the single player race in which you can race on levels you have already unlocked, against characters you have already unlocked. It’s fun for one on one racing
Like most kart games, Sonic & All-Stars Racing Transformed has boxes that racers can drive through to obtain various items that they can use to protect themselves and attack the enemy. There are about ten different items that you can choose from. The Blowfish can be used to set as a mine behind you, and it can also be launched in front of you. Ice shards can be used to freeze and halt the enemy momentarily, and the glove can be used to physically catch an enemy’s attack and shoot it back at them. Firework is a type of angled projectile that can be launched at enemies, but they can also be launched at walls to ricochet and hit enemies. There is also a boost power up, but that is pretty self explanatory. Another type of pickup is the Chrome/Drone, which is an RC car that homes in on an enemy. The Swarm is a pretty cool power up in my opinion. It send a swarm of gigantic bees to the front of the pack and they clutter up the roads, causing the racers to crash into them. They can be avoided, but they are harder to avoid then one might think. Probably the most important pickup is the All-Star. This pickup lets the racer activate their special ability. This ability makes them invincible, but what they can physically do in All Star mode varies between each character. For example, Football Manager can launch large soccer ball projectiles at the enemy, while Shogun can launch a large streak of missiles in front of him. The game has very interesting pickups, and they make the game ten times more competitive and fun! 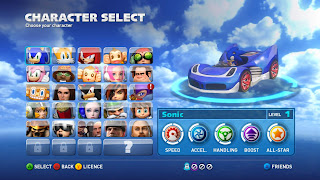 There are a total of 28 racers in this game, giving you various options to pick with their unique stats and abilities. What really sets this game apart from other kart racing games are the mods you can unlock, and the fact that you’re character can travel on land, air, and water. Each character can be leveled up, and with each level they unlock a mod. The mod can be a balance mode, acceleration mod, speed mod etc., and it changes the stats of your character. It usually changes two stats at the least, possibly three, and it really adds a new level of depth to the game. The races themselves span across various levels from various video games. There are levels and characters from Jet Set Radio, NiGHTS, Total War: Shogun, and more. Even characters from Team Fortress make an appearance in this medley of All Star Racers. The races change each lap, giving you new obstacles to worry about such as a ramp being destroyed, forcing you to race part of the level within the water. The air and water action within the game is surprisingly pretty solid. I really enjoyed flying in the air and then seamlessly gliding back into kart form. Each kart transforms depending on what terrain they are on. For example, the Shogun will have a Oriental themed kart, and a dragon boat for water travel, and a bi-plane like vehicle for air travel.
It should also be noted that this game supports Co-Op. You can plug in another Xbox 360 controller into your PC if you are not already using one, and race with your friends locally on your laptop! You can connect your laptop to a TV or monitor via HDMI and then race like that as well for a better experience. This feature alone makes the game worth it because you can game with friends and family without everyone having to own the game or wait turns to play single player. It was a fantastic addition to the game and it makes playing the game all the more enjoyable. The overall mechanics and features of the game are fantastic and fit perfectly into the kart racing genre. I’d give this game a solid 9/10.