Skip to content
Background:
Bastion was my first casualty of the Steam Summer Sale. I picked it up for $3.75 I believe, purely for the same reason I picked up Giana Sisters: Twisted Dreams a couple months back, it looked visually stunning and seemed like a great RPG. After various laptop issues and driver problems, I finally got around to playing this gem, and after finishing the game, I can honestly say it is one of the best isometric RPG Games I have played so far.
Features: 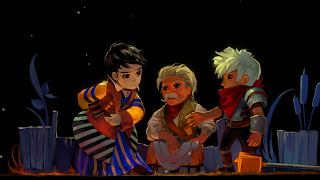 One of the coolest features about this game is that you have a narrator. He doesn’t just narrate the storyline and the overall plot. He narrates what you do like evading enemies, smashing Windbags, and falling to your doom. The voice actor, Logan Cunningham does a fantastic job with the narration and very addicting voice that makes you want to listen to him more. He is also quite humorous and modern, making him a bright and lively narrator. I recall I was smashing a lot of boxes with the Cael Hammer (which is totally badass by the way) and he said “The Kid is raging”.

Another stunning feature to the game is that the level grows as you progress through it. What I mean by that is that as you walk, pieces of the level start to appear and form pathways for you to walk on. It reminded me of the LEGO® games like Indiana Jones and Star Wars when I first saw it. I find this idea pretty cool and it’s unique as well. The developers over at Supergiant Games were able to make even the most basic concept of presenting a level and make it look stunning and intuitive.
The game opens up with you, a voiceless character simply named “The Kid”, waking up and attempting to get to the Bastion, what I presume to be a safe haven. You make it there and meet an old man who identifies himself as the narrator. He explains that some catastrophic event known as ‘The Calamity’ has occurred that has wiped everything out and it’s your job to fix it. That is basically the premise of the game without giving too much away. The game itself is visually stunning. Everything was hand painted and it has a very Borderlands look to it because of that. Nothing looks out of place and it amazes me that the whole Bastion universe was built in two years.
Bastion’s menu is also customized to two groups of people. The first is the normal campaign mode; you have two lives, simply dubbed “Story Mode”. The second mode is “No Sweat Mode” which is a much more relaxed mode. You are given an infinite amount of lives and the purpose of this is so that you can enjoy the campaign aspect of the game without worrying about surviving. This was a pleasant feature, but I feel that surviving through the levels themselves is part of the RPG itself, and casting it aside and giving the player infinite lives kind of takes away from that. Upon beating the game, you are given two more modes, New Game Plus, and Score Attack mode. New Game Plus unlocks all the buildings you earned from the previous run through of the game, and it gives you all the weapons and XP earned from the previous run through as well. I loved this feature because upon beating the game, I instantly had the urge to play it again. Score Attack mode unlocks everything and makes you go through the whole campaign while giving you a score as you progress.

The gameplay itself is fluid and I had no issues with terrible button placement or any lag for that matter. It is gamepad compatible so just plug in your Xbox 360 controller and you’re set. The enemies each look different, memorable even, and the game increases the difficulty slowly so you aren’t overwhelmed by tough enemies too soon. The Safe Haven known as “The Bastion” surprisingly has a lot to offer. For starters, you can build six buildings that can be upgraded over time (a very common RPG feature), and it also has flashbacks, referred to as “Who Knows Where”, where you learn about the story of another character via narration. You fight off waves of enemies to hear the next part of the story, and once you defeat all 20 waves of enemies, you are provided with the background story to a new character. I felt the was this feature was presented was really cool and I enjoyed it thoroughly. 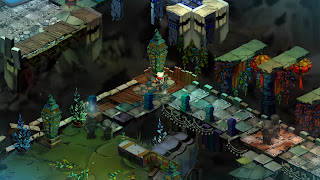 This game took me by surprise when it comes to its weaponry. You are at first given the Cael Hammer and then the Fang Repeater, an eight shot machine gun. As you progress through the campaign, you are provided with new weapons like a carbine, a bow and arrow, a mortar strike, and my personal favorite, dual pistols. They each work in different manners and useful to various degrees. For example, in a forest area, you’re better off with the flamethrower or Cael hammer than a machete. You are allowed to carry two weapons at a time, but you can easily switch between the two by pressing “X” or “B”.

Now for the most important part of this review…. the storyline, a part I purposely left for last because it adds suspense! I will admit at first the storyline is a little bit confusing, but the developers and story writers over at SuperGiant make sure to tie up all of their plotlines, making sure no story is untold and there are no unfinished parts of the plot. The plot itself isn’t the greatest plot in the world I will say that. It was a good storyline, and I personally really liked it a lot because it felt a little post apocalyptic without all the zombies and horror (Not a big fan horror fan). I do feel that they could have done more with the storyline, but I guess it was better to cut it off before they added more things to it that could have potentially ruined the story. I overall really like this game and I’d give it a 7/10. The features and the look of the game were amazing, but the storyline could have been a bit better and longer.