Skip to content
*I used a Samsung Galaxy S3 for this review*
One of the nicest things about iOS for most people is its UI. It is very clean and easy to navigate. Everything has a spot and a child could navigate it due to its simplicity. Upon coming to the Android OS(Ice Cream Sandwich or whatever version you use) I found myself missing the familiar iOS look. Although the Android OS is unique in its own way, I felt slightly more comfortable with iOS. I searched around on the Google Plat store because I was sure I was not the only one who felt the same say. Sure enough an hour later, I found Espier Launcher. After installing it, I never looked back. Plus, you don’t need to have a rooted or modded phone for this application to run! 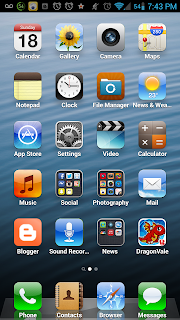 Upon install, it converts your phone into an iOS replica. The icons look the same and feel the same as well. You can set this as your default launcher so that your phone will always look like the iPhone. The launcher tries to stay true to iOS in certain respects, while in others it shows that it can be flexible. For one, you will see that all of your apps that you have downloaded are displayed. They are listed in ABC order and reach across numerous screens (I had eight screens of apps.) For those of you that don’t want all of your applications on display, Espier launcher lets you ‘hide’ the application by long pressing the item and then clicking on, it which brings up a very helpful list of options. Minus hiding the application, you are also given to the ability to rename the application and change the icon of the application itself. This is great for renaming and changing applications to get the ‘iPhone’ look. The lock option is somewhat useful for those private applications you use, but I use it for my messaging when I’m with friends in case anyone is nosy.  I didn’t expect so many options within the launcher for changing the design of the application icon, so I was pleasantly surprised to see I could change icons, hide them, rename them, and even import icons from my SD card for those icons that aren’t provided in the theme. 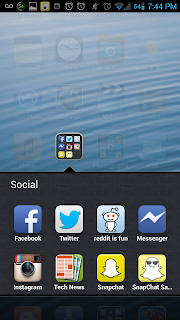 If you swipe to the right of your home screen, you are provided with a new screen that lets you search your phone! Sound familiar? Yes, it is exactly like the iPhone’s feature. If you swipe up, you are shown the task menu that is similar to the iPhone’s when you long press the home button. I believe this part is purely for show because I’ve tested it and the applications do not really close. The folders look exactly like the iPhone’s and act the same way as well. After holding 16 applications, you are provided with the scroll option for the next screen. Upon clicking the menu button on my phone, I am provided with a few options such as Themes, Wallpapers, Settings, and Preferences. The most intriguing of the four is preferences. This is the only screen that resembles the iPhone’s setting’s menu in terms of the UI, but it offers options like selecting how many rows and columns of apps you want as well as changing the font and other little things
Espier also offers other apps such as iPhone Notifications and Reminders. I believe I use their iPhone Notification system and I like it very much. It is reminiscent of the older OS notification layout I believe, (I’m not familiar with iOS and their corresponding numbers like 6.1.1 or 5.4.3). I overall like the launcher and what it does, but it is very sluggish at times. I’m pretty patient so I’m not terribly frustrated with it, but there is good one to five second delay at times, but I guess that’s expected with a launcher when it wasn’t ingrained in the original OS.
Espier also has a naggy AppHub feature that can’t be hidden, so I just isolate it in a corner. It’s a silly add on, practically spamware, that alerts you with random application updates for games you have every downloaded. To remove it, you have to pay money or get coins or something along those baffling lines. I never bothered to do that because I don’t want to spend money on something so silly, but some people do. It didn’t break the deal for me, but I wouldn’t mind removing it. All in all, despite it’s shortcomings at some points, Espier Launcher is a pretty cool application, one that I recommend if you want the iPhone layout for your smartphone.
Here it is in the Play Store: https://play.google.com/store/apps/details?id=mobi.espier.launcher