Skip to content
Background:
It feels like it has been thousands of years since I purchased Sonic Adventure Battle 2. I remember going to my cousin’s house back in 2004 and they were playing it on their Nintendo GameCube. The graphics blew me away and the storyline was intense. I went home that night and ordered the game online, a game that I devoted hundreds of hours to for the next nine years.
Upon browsing Amazon’s deals during their summer sales for online games, I found the very same Sonic game I bought nine years ago on sale for $1.25! To sweeten the deal, the DRM was Steam! I quickly bought the game and the the DLC that came with it (which was the multiplayer content that was included in the original game) for .49¢. 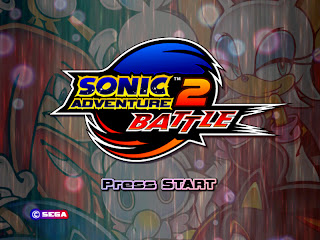 One of my main reasons for buying it was that I didn’t want to apply wear and tear to the disc, which had a few scratches on it. Since this game was ported to the PC I will discuss any changes as well as the overall performance of the game.
Plot:
My laptop has been in the shop for a while due to various issues that you can read about in my HP post below, so I am currently using an HP ENVY m6 that has an Intel ® HD Graphics 4000 video card. The game looks stellar as I remember it. The Campaign mode to me was pretty unique. You could either play the Hero story line, or the Dark Storyline. Both storylines tell the same story, but each storyline has their own unique events that contribute to the overall plot. I personally recommend you play the Dark Storyline first because it contains the beginning plot line. The Hero storyline kind of just drops you into the midst of things, with no real understanding of what’s going on. Within the hero storyline, you play as Sonic the Hedgehog, Knuckles the Echidna, and Miles Tails Prower. To reflect this, the Dark story line lets you play as Shadow the Hedgehog, Rouge the Bat, or Dr. Eggman.
The missions themselves are divided into three categories. Sonic and Shadow have the typical platformer styled missions where your initial goal is to get from Point A to Point B. Knuckles and Rouge emerald hunts in which they have to find three pieces of the Master Emerald that are scattered across a stage. Tails and Dr. Eggman have a similar mission layout in comparison to Sonic and Shadow, but they battle in mechanized 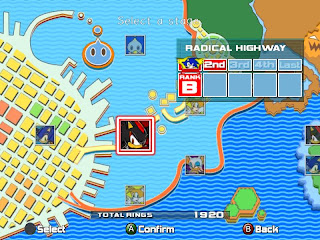 robot walkers. The missions as a whole are very fun and the game increase in difficulty in such a clean manner that it feels natural. The storyline leaves virtually no loose end untied and makes sure to inform the gamer of all that happened, something I appreciated after playing many games that neglected to finish up certain parts of the stories. The artwork itself is amazing and still remains as stunning when played on PC. There were a few lag issues here and there, but nothing major that completely turned me off to the game.Upon finishing a mission, the game gives the player a Sonic Emblem. There are a total of 180 emblems in all. This was particularly fun for me since I am a completionist and do my best to 100% finish a game if I can.

Features:
The added bonus to this is that you can obtain more Chao eggs for your Chao garden. This adds replay value for the game, but only if you’re interested in the Chaos and the Chao Garden. The Chao Garden is a great feature of the game where you raise Chao eggs and let them grow and compete in tournaments. This feature alone is why a lot of people bought the game once it was ported to the PC. You can buy new Chao eggs so that you have different colors and if you raise them correctly, they can replicate actual characters in the same such as Sonic, Tails, Shadow etc. It is an insanely cool feature that makes the game last so much longer. 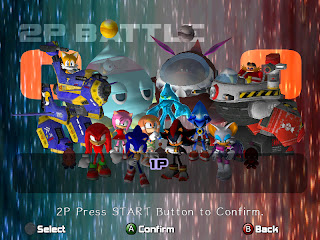 The multiplayer feature of the game is pretty cool to, but I don’t find myself playing it as much. Players can have action races battles where you can play as Sonic, Shadow, Amy, or Metal Sonic and race the other two the finish line. They are action packed races and I will admit if I had friends that played this game more often, this would be all that I play. The levels are thrilling and they reflect the levels that are within the storyline. Treasure hunt missions are exactly what the campaign missions are like except you have two people hunting for three gems. The one who finds two of the three gems wins! You can play as Knuckles, Rouge, Tikal the Echidna, and Chaos 0. The two player games also offers shooting games where the player plays as either Tails, Eggman, ChaoWalker or Dark ChaoWalker. The players are places on platforms in a 2-D manner and they have to defeat each other. The remaining mini games are the Kart Race, where players can race each other (Can also be done in single player mode), Chao Karate and Chao Race where you can pit your Chaos against the CPU and the other player to see who wins.
It still blows my mind to this day that a game this well produced and made released in 2003. The game physically looks years ahead of its time and although the camera control is a little shaky in places, it is overall fantastic. The missions and story line remain the same and the Chao Garden looks amazing in HD. This game has a lot of replay value if you are interested in Chaos. The missions are fun and enticing and they detailed. This game in particular brought me back to my childhood and it was fun playing it again. The game has had some issues with it crashing upon clicking “Save Settings”, but I don’t have this issue. Fair warning though, SEGA doesn’t not offer refunds on these games so if you do buy the game, see if there is a way to figure out if your drivers are compatible with the game.  I fully recommend this game to any Sonic fan or anyone who is a fan of a cool 3-D platformer that happens to include everyone’s favorite blue hedgehog.